In Search of Lost Scents

In his first manifesto (1909) the leader of the Futurists F.T. Marinetti wrote something particularly meaningful: “il fiuto, il fiuto solo basta alle belve”. Freely translated, it reads: “The scent, nothing but the scent. That’s all an animal needs!”. At the time, this statement unmistakably reflected the rebellious nature of Futurism and emphasized the overall message of the Futurist movement: to create a violent break with the past. By elevating the sense of smell, Marinetti arguably challenged the traditional sensory hierarchy in the realm of philosophy and aesthetics, which privileged above all the sense of sight.

My study reveals that scents and the sense of smell were deeply embedded in virtually all known artistic and political fields of interest and activities of the Futurists. Until the end of the movement in the 1940s, members not only wrote countless poems and manifestos about scents and the sense of smell; they also ‘aromatized’ a dance, a theatre play, cinematic performances, and possibly toys and other objects.

In this, their goals were varied, including the reinforcement of their political ideals, the opposition of the visually oriented bourgeoisie, the expression of modernity, the enlivening of Total Works of Art, and the establishment of their identity as Futurists – or as a group of ‘disciples of the future’. The Futurists clearly copied ideas and techniques from the Symbolists, but they did expand their olfactory palette with certain accepted forms of ‘stench’ (such as war smells and manure) and with synthetic odors that the industry had produced (such as ozone and man-made molecules).

What is remarkable is the extremely flexible and creative way in which the Futurists expressed scent and olfactory phenomena and practices. For example, they invented a number of neologisms such as “aeroprofumi” (modern scents) and “profumatoio a tastiera” (scent keyboard).

The fact that this study could provide so many insights into the role of smell in a particular period, has to do with the unique character of this time frame. The Futurists witnessed a remarkable paradigm shift. The age-old miasma theory (the idea that not germs but stench was responsible for disease outbreaks) was dismissed, approximately at the moment that the vibrational paradigm (the idea that smell was a vibratory phenomenon) came into existence (although these did not replace one another). The Surrealists, for example, were further removed from these theories, and the significance of bad smells played a less prominent role for them. The Futurists perceived the smells of transformation that were the result of expanding metropoles, new machines, and means of transportation with their associated exhaust gases – all with their very own noses. Their description and relationship to these new scents prove that this period was characterized by re-odorisation rather than de-odorisation. This is important for nuancing the idea of ​​modernity, as it is often wrongly associated with increasing inodorateness.

The Futurists were not just passive (nose-)witnesses of olfactory changes, but also caused a shift in the sensory hierarchy itself. The emphasis on smell and the other lower senses (touch and taste) can be seen as a general tendency within avant-garde movements such as Symbolism, Dadaism and Surrealism. No other group of artists however, used scent so purposefully, creatively and regularly in their art, literature, and political actions. The Futurists did not so much try to elevate scent as an autonomous form of art, but to integrate art with everyday life by (also) addressing the senses of smell. 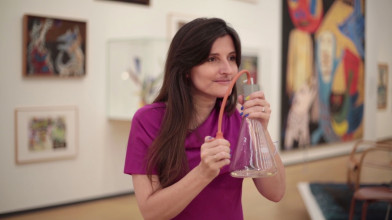 What’s next for Caro Verbeek?

With her vast expertise in olfactory history and nose-on experience in museums, Caro Verbeek will contribute to the pan-European project Odeuropa by organising and curating events and exhibitions that will address the eyes, minds and noses of museum visitors. She is aiming to heighten the inclusivity of heritage institutions by making objects and history more accessible by using scents as a story-telling technique.

She will also continue teaching the flagship course ‘Knowing by Sensing’ at VU Amsterdam, in which students don’t just learn about the senses, but by training their senses.