POSTPONED: An Animal Walks Into An Art Institution. On Alternative Languages.

Thank you so much for your interest in this event, it has now been postponed until further notice. We send strength throughout the cultural sector, to all who cannot continue to host events, to work, who loose income, and in some cases even the ability to be together with loved-ones. An “animal” did “walk” into institution after all … (!) and it does slow us down collectively, makes us change our ways and “discourses”… Stay strong and healthy. We keep you posted if and when we re-organise this event on a later and different occasion. 🙏

Does the institution exist in the way we think it does? What does the entering of an animal into an art institution tell ‘us’ about the institutional structures we created and inhabit? Taking place within the framework of Veem House for Performance’s 10X10 thematic series dedicated to the notion of ‘discourse’, we ask what happens when a non-human animal enters an art institution. What does ‘its’ introduction tell ‘us’ about the institutional structures in which we find ourselves and to which we became accustomed: the language we speak? The non-human animal is still often understood as a subversive force, but it simultaneously allows one to imagine the world otherwise.

Moreover, the non-human animal’s appearance into the museum has been considered a disruptive agent, a form of critique of the institution even. Witness Marcel Broodthaers’s presentation of the camel at the Musee des Beaux Arts in Brussels in 1974, showing the (then) still existing gap between nature and culture. What alternative perspectives does the non-human animal open up?

Humans and non-human animals share the same environment, but unfortunately relations and connections are sparse. The non-human animal is generally excluded from “discourse” as such, because it is commonly thought in philosophy and political sciences that language is solely a human feature. That is also why non-human animals are mostly excluded from political communities, since one of the prerequisites of such participation is “logos or “rational speech” (cf. Eva Meijer, When Animals Speak). Providentially, many artists, political thinkers and philosophers alike, are trying to disrupt this conservative affiliation by re-thinking and acting alternative political practices (cf. Latour’s Parliament of Things).

The event compiles works (in progress), performative structures and insights, by students of the MA Approaching Language of Sandberg Instituut and invited artists who reflect on the presence and potential of the animal to open up alternative languages.

For this evening Veem invited ARIAS, who in their turn invited the MA approaching language from the Sandberg Instituut, the event is a result of their collaboration. 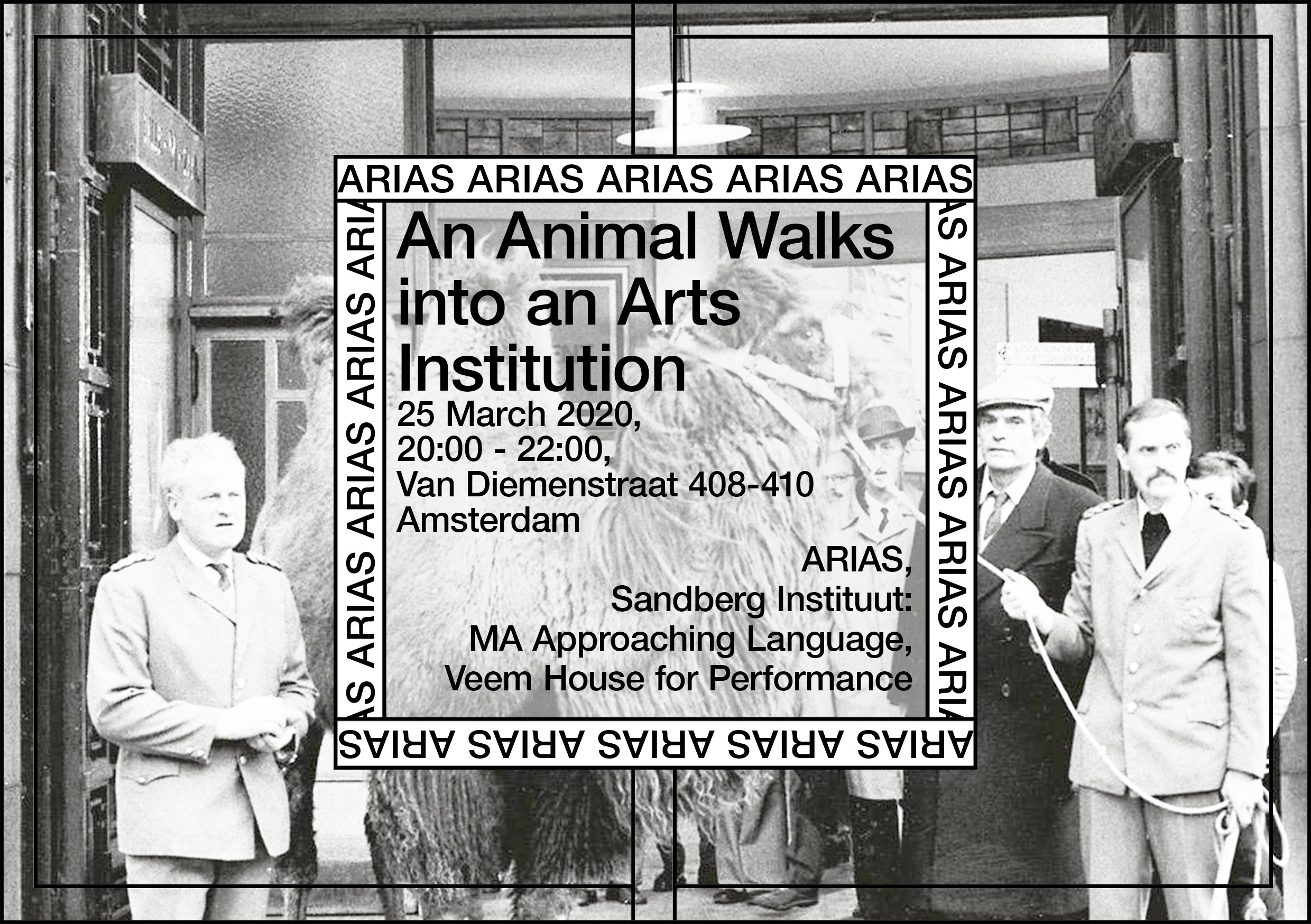