How do the arts and artistic research contribute to planetary-scale questions of ecological transformation and disaster? This evening featured three examples of special ways in which the arts trace the cultural, political and social implications of local and global moving resources, showing the shifting contexts and social ecologies of primary materials (such as oil, silicate or wood). In the first part of the evening media researcher Adam Nocek underlined the importance of thinking about the physical materiality of our contemporary media culture and the ethical consequences of the entanglement between our media and geophysical systems. Second, artist Isabelle Andriessen entered into a conversation with art history professor Katja Kwastek to discuss the significance of her “zombie sculptures” through which she examines how one can animate inanimate materials. Can we experience the temporality of material transformations? In the last contribution, a team of scholars, artists and designers introduced their research project ‘Re-Source,’ which traces, on a city scale, the movements of residual materials (such as plywood or plastic) and asks how new design strategies could activate new users for these materials and new circular economies.

Adam Nocek is an assistant professor in the philosophy of technology and science and technology studies in the School of Arts, Media + Engineering at Arizona State University. Nocek is the founding director of the Laboratory for Critical Technics (LCT) and author of numerous articles on design theory, media materialism, technoscience, process philosophy, and the history and philosophy of science. Nocek is the co-editor of The Lure of Whitehead and is currently working on two book projects: Animating Capital: Molecules, Labor, and the Cultural Production of Science and Ecopolitical Design: Speculating After Anthropos.

Isabelle Andriessen is an artist and currently a resident at the Rijksakademie in Amsterdam. In her work she is interested in creating sculptures that decompose and transform while on display, an aspect that provides them with an ambiguous sense of agency and anthropomorphism. Andriessen was a participant in the Arts and Science Honours programme of the Royal Dutch Academy of Science (KNAW) and Academy of Arts (AK). This year she will exhibit her work at Lafayette Anticipations in Paris and the Tschumipaviljoen in Groningen. Her work will be part of a group show at Stedelijk Museum, Amsterdam from November 2018.

Katja Kwastek is a professor of Modern and Contemporary Art at the Vrije Universiteit Amsterdam (VU). Her research focuses on processual, digital and post-digital art, media history, theory and aesthetics, and digital humanities. She has lectured internationally and published many books and essays, including “Aesthetics of Interaction in Digital Art” (MIT Press, 2013).

Ginette Verstraete is a professor of Comparative Arts and Media at the Vrije Universiteit (VU). Her current research explores the significance of participatory urbanism in Western Europe, from 1960s to the current moment and focuses on the role that media, art and design have played in this. She is the initiator, together with Dr. David Hamel and studio Esther van de Wiel, of the research project ‘Re-Source, Participation in reframing residual materials in design theory, design practice and design education,’ funded by NWO.

Joost Adriaanse is an artist and researcher in the Re-source project on the design practice, circular economy and social participation. As a participant observer he investigates method through documentation and reflection. Adriaanse is also an editor for Digressions- Amsterdam Journal of Critical Theory, Cultural Analysis, and Creative Writing.

Ester van de Wiel is designer, researcher and curator of public space. She teaches at the Design Academy Eindhoven (department of “Public-Private) and at de Willem de Kooning Academy in Rotterdam. As a curator she is interested in working with both amateurs and professionals in vacant or forgotten urban locations, thus creating spaces that “work so well that we can run wild in them” (John Cage).

Kristine Steenbergh is an associate professor and co-founder of the Environmental Humanities Center (EHC) at the Vrije Universiteit van Amsterdam. Scholars working at EHC believe the environmental issues of the Anthropocene are complex and therefore need an approach that accommodates and works with a variety of perspectives on this complexity, fostering conversation between different disciplines. Steenbergh is also a member of The Young Academy of the Royal Netherlands Academy of Arts and Sciences (KNAW) and editor of Cultural History (Edinburg UP) the journal of the International Society for Cultural History.

Four evenings on Art-Knowledge by ARIAS & KNAW
What can the sciences learn from the arts (visual and performing arts, literature, architecture, music etc.)? And what can the arts learn from academia? The KNAW (Royal Netherlands Academy of Arts & Sciences), the Akademie van Kunsten and ARIAS offered a series of four events at which artists and researchers show, perform and lecture on the way art research operates on the interface of art and academia – from new ways of writing to new concepts of wellbeing, experimental forms of researching ecological questions, and experiments in education. 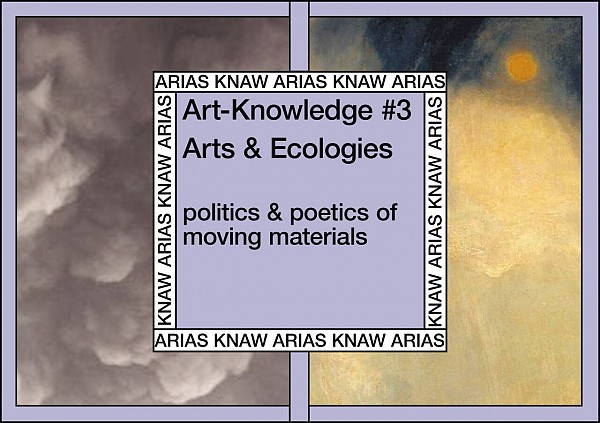